Is HIFU ultrasound machine treatment the future of facelifts

Most people are saying goodbye to traditional surgical facelift procedures and are opting for HIFU ultrasound machine treatment. But are these procedures really worth it? It sounds too good to be true that someone can defeat anti-aging just by using ultrasound waves. As a HIFU machine manufacturer, we can understand your confusion. Letting someone bombard your face with strange waves is definitely scary. That’s why we have explained in this article why the HIFU facelift machine deserves your trust.

HIFU or High Intensity Focused Ultrasound machine is a non-conventional treatment that uses sound waves to stimulate collagen formation. It's becoming more popular as it can do a job similar to facelifts using no invasive practices.

HIFU is most commonly known for its use in the treatment of tumors. The first recorded use of HIFU for aesthetic purposes was in 2008. HIFU causes tissue damage that can help reduce fat and improve skin texture. HIFU was approved by the Food and Drug Administration (FDA) in 2009 for dermal resurfacing. The FDA also cleared the device in 2014 to reduce wrinkles and re-contour skin that lost firmness due to aging.

Several small studies have found the use of HIFU medical equipment to be safe and effective for facial lifting and refining wrinkles. HIFU is typically used for skin tightening, lifting, and rejuvenating. The procedure also has off-label uses for other facial cosmetic procedures (e.g., facelift, eyelid lift).  HIFU ultrasound machine can also be used to help patients with skin conditions such as acne and scars, but it may not help patients with more severe cases of sagging skin.

So far, HIFU has been an effective treatment that is set to replace traditional facelift practices. If you are thinking about why we are so confident about it, we have given our reasoning below.

HIFU facelift machine uses focused ultrasound energy to target the layers of skin just below the surface. The tissue is heated up rapidly, which causes cellular decay. It may seem dangerous but this damage compels the cells to produce more collagen which rejuvenates the skin. HIFU medical equipment has been used in various surgical procedures such as resurfacing, cosmetic surgery, and reconstructive surgery.

Although the HIFU ultrasound machine has been proven to help improve the appearance of wrinkles on most people, it may not be appropriate for everyone. If you are above thirty and have slight to moderate laxity skin, then the HIFU facelift machine may be a good choice for you.

People with a high degree of loose skin or photodamaged skin may require several treatments before seeing visible results. Depending on how severe the condition is, results can vary from person to person.

Unfortunately, some people just don't have the skin elasticity or quality needed for High Intensity Focused Ultrasound machine rejuvenation. This can be because they are older, have more facial photo-aging, or have severe skin laxity or saggy neck skin. In these cases, surgery is their best and only shot.

HIFU machine manufacturers also don't recommend using this device if you have infections and open skin lesions, severe or cystic acne, and metallic implants in the treatment area.

While a HIFU ultrasound machine carries lower costs and risks than its counterpart. However, results may not last as long and multiple treatment sessions will be needed.

Why HIFU ultrasound machine is the best option:

There has been a major increase in the popularity of facelifts over the last few years. HIFU and other nonsurgical alternatives treatments are responsible for this change. The total number of procedures performed between 2012 and 2017 has increased by 64%.

HIFU is a non-invasive procedure that uses high-intensity ultrasound waves to treat skin conditions. The treatment is safe, painless, and long-lasting, with the possibility of achieving long-term benefits for patients. HIFU has many aesthetic benefits, including reducing wrinkles, tightening sagging skin on the neck, and lifting cheeks, eyebrows, and eyelids. Studies have shown that it induces better healing for the body and the skin after a few weeks.

In a recent study, 66% of the people reported visible improvements to their face and neck appearance in just 90 days. A study in the Journal of the American Medical Association found that 92% of the men who had HIFU could resume their normal activities the following day. 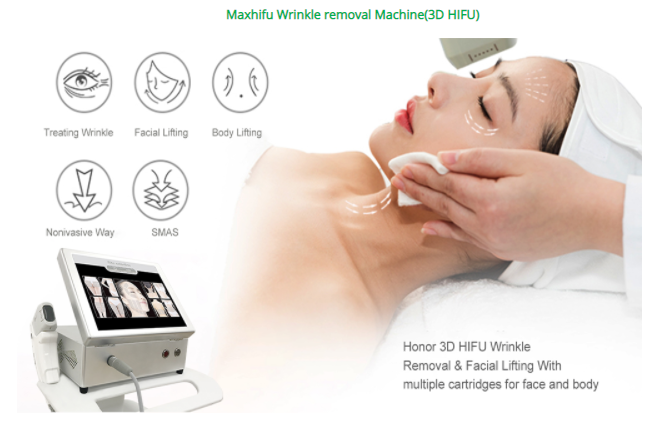 Some people may experience a slight prickly sensation during a HIFU procedure. It arises due to the heat emitted by the focused ultrasound beams. HIFU machine manufacturers advise taking acetaminophen or a nonsteroidal anti-inflammatory drug prior to treatment to reduce symptoms.

It is normal to experience some discomfort or redness after getting the treatment. It will gradually subside throughout the day, and by the next day, your skin can usually return to its normal state.

HIFU machine manufacturers recommend removing makeup and skincare products from the face. A High Intensity Focused Ultrasound machine works best when the target area is as clean as possible.

The procedure would typically take 30-90 minutes, depending on the severity of the blockage and other factors. The HIFU facelift machine is used to bombard ultrasound energy on the targeted area after applying a gel. After the procedure, you can go home and resume your normal daily activities right away.

The takeaway of hifu

Its advantages are no incisions, no scarring, and no required time for rest or recovery. Most people see full results three months after their first treatment. Although it is not a miracle cure for aging, the HIFU ultrasound machine is an excellent non-invasive treatment for skin aging in patients with mild-to-moderate facial skin laxity. However, the procedure may not suit severe sagging as HIFU can only treat loose skin and cannot tighten saggy skin.

All things considered, HIFU medical equipment is the future of the facelift. The convenience and affordability this treatment provides can’t be challenged by any other treatment.

Previous: You should do this before undergoing IPL laser hair removal machine treatment